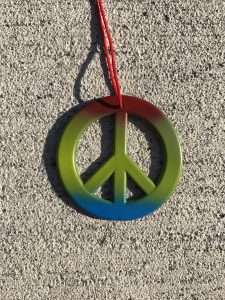 My son, Teddy, was having a difficult time falling asleep last night. And he let the rest of us know with assaulting shrieks of discontent.

So, naturally, to silence him, I walked up to his room, lowered my face to about an inch from his, and shouted: “Blaaahhh!!! Don’t do that!!! Blaaahhh!!!” That showed him. I also flicked his earlobes, just to make sure he got the point.

No, of course that’s not what I did. Instead, I wooed him back to sleep with a combination of holding, swaying, speaking softly and reassuringly, giving him his aptly named “pacifier,” and patiently waiting out his crying until he had voiced what he needed to voice.

Not only were aggressive screams and ear-flicks not the only ways to deal with Teddy’s attack on the quiet post-kids-in-bed phase of my evening, these were possibly the least effective ways (not to mention the least rational and least creative).

I would call myself a pacifist. It is fitting, then, that I am a Quaker. The commitment to peace is often a significant part of what compels and entices people to participate in the Friends (Quaker) tradition.

Some would-be Quakers do, however, have reservations about pacifism. For some, pacifism sounds nice, until you start thinking about the extreme examples. Like what to do about irrational, unteachable, unrelenting, destructive individuals. Or what you might do if someone you love was threatened and you could potentially thwart a violent act, if willing to use violence or force yourself.

By “pacifism,” I mean, most simply, the unwavering preference for and use of peaceful and noncoercive means of engaging others in situations in which violence or force is an option.

Pacifism is not a passivity that permits others to walk all over you. Pacifism is gutsy. It is active and intentional. It is subversive. And its scope extends beyond the physical since words, for example, can also be violent.

I believe Jesus was totally committed to the way of peace. Calling him a pacifist, even though we could wrangle over what constitutes “true pacifism” among its possible variants, seems fitting to me.

And while there are some qualities of Jesus we can imitate but need not (e.g. carpentry, celibacy, not wearing deodorant), I think we ought to imitate Jesus’s pacifism. Not primarily by adopting his stances or opinions, but by imitating his way of being with others.

When I have been asked about pacifism, any resistance to it predictably comes from people who seem to be approaching the question from two angles. Either someone thinks pacifism is a poor or incorrect (or even unbiblical) rule, or they think it is unjustifiable given the negative consequences that they assume will result from pacifist actions (e.g., not killing when killing seems like it could actually solve the problem).

But I do not think primarily in terms of rules or consequences but in terms of virtues. I am most interested in the kind of character we ought to be cultivating prior to any tricky moral choice we might face.

Rules can instruct, clarify, and remind me of what is most important. But rules often blind me to the nuances of a particular situation. Rules can make me militant or mean. Rules can be hollow if not given substance by the good character of the rule-follower. Rules can be given too much weight, especially when I don’t consider who made the rules, why they made them, who benefits and who loses with such “rules,” and what allegiance I really owe to these rule-makers.

Alternatively, thinking about the possible consequences of a choice or action is often reasonable and even kind. But basing morality on this can yield some troubling and self-deceiving justifications for our actions. Violence to stop violence might immediately help or save this person (or momentarily resolve my angst or anger), but is the way of violence then reinforced as a legitimate way of interacting with one another, thus begetting more violence? And we could go back and forth about what good has or has not resulted from wars, killing, coercion, etc., our different value judgments and interpretations of history leaving us unable to come to a shared conclusion.

I am not compelled by pacifism as an unwavering rule or an obvious utilitarian choice. Pacifism, were it simply a theory about national relations or what others should do in very serious, life-threatening situations, would not speak to my daily lived experience.

Pacifism requires humility. To be able to see, perhaps in a moment, that whoever the “enemy” before you may be, he or she also, like you, has a story, has reasons, has something sacred he or she is trying to protect, has dignity and value, has actual and potential goodness.

Pacifism requires courage. To be able to take the possibly riskier path of not harming or violating or attacking. To be able to relinquish control or, in some cases, shed the illusion that we are in control at all.

Pacifism requires kindness. To be able to not just not harm others, but, in some cases, to go the extra mile and help others we wouldn’t normally feel obligated to help. To go beyond defending my turf or my needs to honoring all of our turfs and needs. We may be fundamentally inclined to protect our own, but this does not justify realities like nationalism or my unfettered privilege at the expense of yours.

Pacifism requires self-awareness. To recognize that what motivates our violent inclinations may in some cases not be an actual, real danger but an imagined one. Our aggressive, coercive instincts may be triggered by any number of things, like an unfounded distrust of others or the reality that we might be losing something we desperately (but needlessly) want to retain.

Pacifism requires discernment. To be able to see that, in most situations, it’s not kill or be killed, coercion or resignation. Violence and coercion seem to me to be uncreative, simplistic, even lazy ways forward (that arguably do not lead us “forward” at all).

Pacifism requires respect. An affirmation of the sacredness of all life. A conviction that people are more than their crimes and offensive behavior and that those who have wronged us do not “deserve” punishment as though such retaliatory punishment is true justice. Jesus, who forgave to the end, seemed to be able to separate the violent actions of others from who they really were. I suspect what he thought they “deserved” was not punishment but understanding, compassion, and the space to learn and grow and evolve.

Pacifism requires faith. The ability to trust that, despite some recognizable drawbacks to the way of peace, it is the way, God’s way, and worthwhile in the end.

Pacifism requires hope. The ability to see a possible future world of peace and to live in a way that allows that this peaceful future to break into the present—not with force but with inviting subtlety.

Pacifism is more than a novel theory to uphold. It’s a lifestyle. And learning it and living it are not things that happen overnight. Though I do find that giving nighttime comfort to my son is useful training.

2 thoughts on “Why I Call Myself a Pacifist”