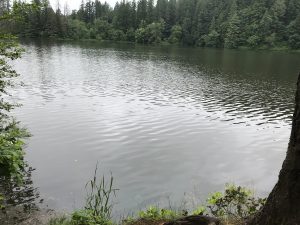 “God loves you.” It is assumed, I think, when these words are spoken or printed, that this is the message we most need to hear. The answer to our core question. The solution to our fundamental problem. And it’s a great message. But not the most important one.

Sharla is struggling in her marriage. She and her husband are both guilty of blaming one another, aware of their own shortcomings but too proud and scared to admit them. The “other” continually becomes the scapegoat for their conflicts. Sharla, while driving one day, sees a billboard that says, “God loves you.” It feels strangely comforting, though in the coming months does seemingly little to alleviate her marital problems. Was this the message she needed to hear?

Rich, a senator, has decided to cast his vote in favor of a bill he finds compelling but that many believe will have significant, negative consequences for the health of many. Yet despite his support of the bill, he is genuinely torn up as he contemplates the countless individuals this choice may harm. Rich, sitting in worship on Sunday, hears his pastor tell the congregation, “God loves you.” Rich feels empowered, knowing that no matter what choice he makes, he is loved by God. Was this the message he needed to hear?

Trisha is a gay Christian but has not been sure one can be both gay and Christian, given the prejudice against her in most churches she has attended. Trisha is told by a well-meaning individual after worship one day: “God loves you.” Trisha finds this hollow, actually more interested in whether or not the person saying these words also loves her. Was this the message she needed to hear?

I think “God loves you” is decent news. But it’s not the best news.

Of course, there are many for whom this news is crucial. Maybe you have been berated and belittled by others, warping your self-understanding. Maybe you have been perpetually ignored and excluded and the fact that someone, some Being, loves you is reassuring. “God loves you” is true, and often what we need to hear.

But I am concerned that it also creates an unhelpful and unfitting narrative about who we are and who we ought to become that stifles real spiritual growth. If “God loves you” is the happy ending, what’s the preceding story? It may be something like:

Version 1: You are not all that lovable. You might not know this, but then you come to church and we kindly help you see that, while you thought you were a pretty decent person with typical human struggles, you’ve been hoodwinked. The truth is that you are wretched, deserving of nothing good. But God loves you! You’re still not actually lovable, but God loves you and this fact, somehow, makes you lovable. And in case you forget, you’ll be reminded often that “God loves you” and, maybe implicitly with a hint of condemnation, “and it’s a good thing!”

Version 2: You’re great! Your problem is that you’re being too hard on yourself. God loves you! You’re beautiful! Yay you! The worst thing you could do is feel guilt or shame about your actions, because God forgives you, even if others don’t!

I’m not so sure “Version 2” is wholly inappropriate for some, given the cruelty their world may have inflicted or be inflicting upon them. But for more privileged Christians, both versions of this narrative concern me.

I think this narrative risks turning the Christian experience into one in which, when our faults and foibles manifest, the solution is not to overcome such shortcomings. Instead, the solution is to resign, knowing that we can’t do better and need not do better, because God loves us. “God loves you” becomes an opiate, a placation, a license to coast, a message permitting us to continue to harm those we love and those we do not know but whom our actions (or inaction) impact. Self-acceptance, for some, may be healthy and life-saving. For others, self-acceptance may be cruelty—even death—to others.

But there’s better news than “God loves you” and it’s this: God’s Love is best.

I don’t mean “best” as if to say that your version of love is so flawed that you can’t trust your instincts and so should question the legitimacy of your love and turn instead to God’s. Nor I am talking about the superiority of Christianity as a religion.

I am not drawn to continue participating in the Christian tradition because “God loves me.” I certainly do not think this was Jesus’s core message. I do think Jesus felt loved by God. I do think he thought others were loved by God, and wanted them to know this.

I don’t need my Christianity to reassure me that I am lovable. I do appreciate knowing I’m valued by the most important people in my life. But that is not why I find Christianity compelling.

I find Christianity compelling (aside from the comfort of familiarity) because I find Jesus compelling. Because I want my life to matter. I want to live in a way that feels truly natural, human, the way I am wired and created to live. I want to belong to a community of others who make me better. I want to learn how to more effectively increase the well-being and decrease the suffering of others.

I am a Christian because I see—and sometimes I have to squint to see it, given the too-often paltry evidence Christians offer—that God’s Love is best.

Yes, God loves you. It’s true! But I don’t want to say “God loves you” to you if you are marginalized and, in saying it, I am asking you to accept your reality, comforted only by God’s warm feelings toward you, and if in saying this I am also implying that your marginalization is “acceptable” and not my concern.

I don’t want to say “God loves you” to you if, in saying it, I am reinforcing a Christian narrative in which the heart of your Christianity is the continued seeking of reassurance that, despite your flaws, you’re “alright.” I hope you recognize your flaws (or, in some cases, discern which so-called flaws are actually not flaws at all) and find the power, by God’s grace, to overcome them, for your sake and for others’ sakes.

I don’t want to say “God loves you” to you if, in saying it, it prematurely ends the Christian story with “God loves you, so relax.” There are people and communities in my life and world who, in fact, need me to learn how to love better, more fittingly. Who need me to do anything but “relax.”

Yes, God loves you. That’s pretty good news. But the even better news is that God’s love is best. Not just God’s love for me, but God’s love through me. It is absolutely the best thing in life, worth knowing, pursuing, cultivating, and living.

What’s great is that Love actually feels really nice! We need not try to love others out of guilt or begrudging obligation, as though these are the motivations we need. We ought to love because when we love, we’re like a hammer pounding a nail, a key opening a locked door, a watch accurately keeping time. When we love, we’re living true to the purpose for which we were created. We are living as we were meant to live.