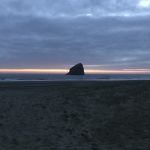 I hold certain beliefs. I defend them. I am sometimes blinded by them. I modify them, if I can see that they need modified. I am guided by them. In some ways, I depend on them.

I don’t see things the same way I did five, ten, twenty years ago. It is likely that I’ll believe differently in a few years. Not because I’m dissatisfied with my present beliefs but because I anticipate that new discovery, new experience, and new voices will continue to shape my ideas, values, and vision.

I don’t want to put words in your mouth, but maybe you’d say something like one (or more) of the following…

“I believe what I believe because it’s what God has revealed to me.” Your beliefs are what they are because this is what God has called you to believe. Granted, God seems to have shown different things to other people (or withheld crucial information from them). But maybe this speaks to inevitable (and acceptable) human diversity or, possibly, to the mystery of God’s sovereignty and freedom (even if it, unfortunately, damns to hell those who believe differently). Though maybe you feel unqualified to assess the merits of others’ beliefs, neither celebrating nor condemning them. You can only speak to your own experience.

“I believe what I believe because it’s what the Bible says.” You don’t need to think up clever, novel theologies or believe what a religious leader tells you to believe; you just read the Bible and believe what it says.  Although, you probably have to be at least a little selective about where you place the weight of your beliefs. Maybe you believe, for example, in the “good news,” but have decided that you prefer Paul’s good news (more about Jesus who died and rose for us) to Jesus’s good news (blessed are the poor, the meek, etc. [Matt 5] or “I have come to free the oppressed, release the captives, give sight to the blind, etc.” [Luke 4]). Or maybe you believe both are true, since the Bible says both, and even have a belief about how to harmonize the two.

“I believe what I believe because I don’t want to disappoint a parent.” You love your parents deeply and you think honoring them means valuing what they value, thinking how they think. Believing something contrary to their beliefs might either break their hearts or incur their wrath, and your obligation to them compels you to maintain accommodating beliefs (or believe differently in secret). You love them too much to hurt them in this way.

“I believe what I believe because it’s helpful.” You know your ultimate goals, what matters most in life, where to spend your time and energy, what actions most facilitate your own flourishing and the well-being of those you care about. So you believe what you believe not because it is “factually correct”  but because it seems to help move you toward your goals, the person you want to be, and the life you want to live.

“I believe what I believe because people who matter to me believe it.” Believing something other than what you currently believe could lead to the loss of religious community with those you care about or depend on. It would disrupt your social life. You’d lose your home group or your Bible study comrades. You’d have to attend a church with a less impressive praise team. You think you’d be alone, and what matters most to you is not what you think but the people who sustain you. Belonging is more important than belief, in a sense.

“I believe what I believe in reaction to past negative religious experiences.” You at some point became disillusioned with the faith of your early life, either because you found it too repressive, antiquated, forced, judgmental, phony, empty, showy, useless, or embodied by hypocrites and meanies. So you’ve swung as far away as possible, leading to your current religious (or anti-religious) beliefs.

“I believe what I believe because I had a mystical experience I can’t explain.” You know it sounds crazy to others, but it is what happened to you. It might not seem legitimate or verifiable to others, but the impact it had on you was real, and that’s all you know.

“I believe what I believe because my brain is wired to believe it.” Your experiences, your genetics, the nurture of your family, and any number of other factors have informed your beliefs. These beliefs are not non-material ideas floating around in your empty skull but are chemically and physically hardwired on your brain. You believe what you believe because your neural pathways are situated as such. You can re-wire your plastic (changeable) brain through deliberate and diligent effort, of course, but that takes work and may not seem worth the effort.

“I believe what I believe because it feels peaceful.” What matters most is that no one feel judged and that all feel included and valued. “Everybody getting along” is more important than naming moral failures, whether the personal moral failures dear to the hearts of prophetic conservatives (like non-conformity to monogamous heterosexual sexuality) or the social moral failures dear to prophetic liberals (like racism, corporate greed, environmental degradation). You believe all sides matter—even if it’s logically and practically difficult to see this through instead of staking a claim in the side you find most morally compelling.

“I believe what I believe because it brings me personal, social, or economic benefit.” Your beliefs are convenient for you. They support what most advance your career, wealth, privilege, or power. Your beliefs feel “right” to you but, coincidentally, do not require much personal discomfort, sacrifice, or risk on your part. They are highly self-affirming, which feels nice.

“I believe what I believe because a person I respect believes it.” Someone for whom you have great respect, whose character you admire and seek to emulate—this person’s beliefs are your own. Because if they believe it, and beliefs and character are linked, then your answer is right there—believe what they believe. Why not?

“I believe what I believe because it’s beautiful.” When you read the sacred texts that matter most to you, spend time in prayer, gather with other like-minded believers, engage in the spiritual practices of your church or tradition, or consider the overarching story of your faith (including creation, salvation, exhortation, promise, etc.) there is a sublime, soothing, inspiring element to the whole experience. It’s compelling in a way words can’t explain.

“I believe what I believe because of where I was born.” You recognize the power of social, cultural, and historical formation. You were born in the Deep South, or in Saudi Arabia, or in China, and believe in a way consistent with the world in which you were raised. It’s not about the merits or logic or beauty of your beliefs; it’s that you were given a story from the beginning, and raised in this story, and have had little reason to not be faithful to this story, a story so integral to your identity.

There are surely more ways to explain the causes of belief than these examples. What would your reason be, if none of these? Why do you believe what you believe? I think it’s worth considering. It may not change your beliefs all that much.

It might also increase our appreciation for the beliefs of others. Or, if we find others’ beliefs reprehensible, perhaps we’ll at least come to understand what’s at sake for others in maintaining the beliefs they maintain—and why letting go can be so difficult.