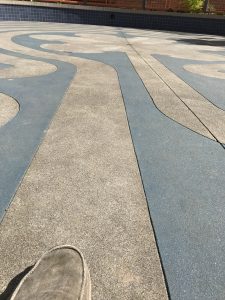 Clara (my five-year-old) and I attended the annual SW Washington Interfaith Thanksgiving Service last week, along with a few others from my Quaker congregation. Muslims, Jews, Sikhs, Baha’is, Mormons, Episcopalians, Catholics, First Nations, and a few others, I’m sure, were also represented.

What impressed me most about the experience was the repeatedly stated concern for the people of our region and world. What impressed Clara most were the flute-playing and complimentary cookies.

The point of this gathering seemed to go beyond “how neat of us to all be together in one room!” Not that this isn’t important. Such gatherings can be a witness to the possibility of peace and mutual respect absent when differing religious traditions (or ugly imitations of them) pick on one another, whether through nasty words or mass murder.

But my take on the gathering was that this mutual respect was a given, not something for which those present felt like they needed to pat themselves on the back. What seemed more pressing to everyone were the needs around them, outside of them.

I have tended to think of interfaith dialogue as essential for getting along with religious others and as an important means of enhancing my own spirituality. Other traditions have rich resources that can be transforming, if borrowed respectfully and in a way that honors the full integrity of that which is borrowed. As opposed to simply collecting religious goodies from around the world like we’re at a spiritual buffet.

Of course, not every Christian can really “do” interfaith dialogue in a sincere way. If you think that non-Christian religious are sources of swirling darkness waiting to corrupt your body should, for example, your stretching look a bit too much like a yoga pose, then you probably don’t have much interest in interfaith dialogue. Better to avoid other religions altogether, unless a clear path for converting another is an option (it’s usually not).

But this gathering was not simply about mutual enrichment, meant to satisfy those present. I heard pleas to address the growing reality of homelessness in SW Washington. I heard calls to make space, personally and systemically, for immigrants and refugees. I heard the voices of women from religious traditions I normally think of as not making much space for women’s voices. I heard a critique of our president, a man who for many symbolizes the kind of fearful, unsympathetic, entitled spirit that affects the extent to which we prioritize the needs and rights of the poor, the stranger, and women, among others. And, while plenty of white folks were present, I saw greater racial diversity than I am used to seeing in a religious gathering—unsurprising, maybe, but worth noting.

This was a service occasioned by a holiday that urges us to be grateful. But I did not hear people simply looking at their own lives and “blessings.”

I heard people looking around, asking the questions Jesus might have intended to leave his hearers with in his fiery “sheep and goats” sermon (Matt 25:31-46): Who is hungry? Who is thirsty? Who needs clothes? Who needs to be welcomed, included, given space to belong? Who needs to be visited, cared for, comforted?

I heard people owning the message of Isaiah 61:1-2, the same message Jesus himself owned at the outset of his ministry: the call to be bring good news to the oppressed, attend with care and compassion to the brokenhearted, and liberate captives and prisoners.

I don’t know what difference this gathering will make in the long run. Calls to action are not always met with action. Getting together to talk about issues of justice and care can potentially be no more than a self-satisfying, soothing experience for those of us who say we care about such things. It feels good to be in a setting where our values are reinforced. Acting on those values to ensure they do not just remain something like novelties or collector’s items? That takes something more, of course.

But boy…it’s at least refreshing to know that people of diverse views can get together and at least agree on something: that suffering, oppression, and tragedy are all around us, and that our collective relationship to the Divine—however we name it—calls us to do something about it.

I grew up with a pretty caricatured view of other faiths—that persons of different religions were, to the devil’s delight, trying to “win” God’s approval through their actions rather than just accepting the grace of God, as I had so rightly and wisely done.

What a laughable and misguided juxtaposition. The people at this gathering, at least on the surface, want the same thing I want. Not to appease God, or prove themselves, or “earn” something. Actually, they just don’t like the fact that people so stupidly suffer when there are actual, real, possible paths to alleviate this suffering, if we had the collective will to act. And they want to do something about it.

As I think back on a different but recent meeting I attended with my regional network of churches (something like a denomination but not exactly), I partly grieve and partly roll my eyes. This body of churches has formally split, over a variety of tensions and differences but, on the surface, over debates about the inclusion or exclusion of LGBTQ+ persons. This afternoon meeting in particular was, essentially, the official claiming of camp property by the more powerful group, pushing the less powerful group out of ownership and full participation in the life of this camp.

These two groups—those who will continue on in the religious network (or “yearly meeting,” in Quaker-speak) and those involved in the emergence of a new religious network—are Christian groups. And yet, as I sat in that meeting, marked by expressions of sadness and incredulity on one hand and homophobia, greed, manipulative secrecy, and an old boy’s club mentality on the other, I felt like I was at an interfaith gathering.

But not the good kind of interfaith gathering.

Not the kind where people of different stories, traditions, heritages, people who have responded to the call of the Holy, the Ultimate, the Divine, in the most faithful way they know how…where these people get together and say “we may be different, but who the (expletive) cares, people are literally dying around us. So let’s get over ourselves and do something about it.”

I do hope that I can be increasingly part of the work of God in the world, the work that Jesus claims in the temple as definitive to his identity and ministry. The work of “binding up” and “proclaiming release” and “giving sight” and “bringing good news to the oppressed.”

There’s much to be done, and idealism must be kept in dialogue with realism. But last week’s interfaith gathering gives me hope. I pray these partnerships lead beyond positive feelings to positive change, as we walk the way of love, together, energized and challenged by one another.

And I also pray for an alien arrival. Because, at least in some movies, that seems to be what it takes for people to rally together for common ends, recognizing their shared humanity and responsibility to one another.

Help us, aliens. You may be our only hope.