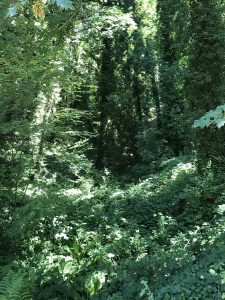 My opening remarks to Camas Friends Church this morning, more or less…

Brad told me that a theme of his reflections this morning on his experiences working with refugees in Greece would be “restoring my faith in humanity.”

As is often the case with sermons—maybe this is true for you too—that feels like the exact message I need to hear today. And to have faith in humanity is to also, I think, have faith in the God who created humanity, cares for humanity, and sticks with humanity, no matter what horrible things we say or do.

I recognize we all have varying degrees to which we are aware of events happening outside of our immediate sphere. And such lack of awareness may have little to do with our character and more to do with how busy we’ve been, how much we’ve been on social media, what attention-consuming demands our family rightly places on us, or the sheer number of “things” that happen in the world on a given day.

But you might be aware of a problem that is not new but which many of us might have hoped would by now be a tragic memory in the human story and yet is, unfortunately, still a present reality. It goes by many names, but some of them include: Racism; Hatred; Prejudice; Fear-of-Otherness.

These ugly realities manifested this weekend in Charlottesville, where extremists made a very strong statement—many of them actually—that show me that the work of peace is still very much needed. A statement that whatever progress we’ve made as humans in making sure every person is respected and protected, the story of this movement of love is still unfolding.

Maybe you knew this. But when I see frightening images come across my newsfeed, or hear hate speech with ominous echoes of the past, or learn of people getting hurt or, worse, killed…I am reminded of the disturbing reality that something opposed to the Spirit of God, to Jesus, to Love…is powerful and at work.

But…sorry to say it…we’re in this together. We’re intertwined. This is not just a few bad people. That would be nice if it were the case, because then we could just condemn them and move on with our lives. But I think this is a “we” problem.

When we fail to see—even the kindest of us—that while we may not be “racist” we may still bear the marks, tendencies, and patterns that come from a world where prejudice is normal and systemic; and when we fail to say “I’m ashamed to admit it, but I am a little prejudiced, and I want to change that”…we separate ourselves from others.

So if you agree with me that we are sick; if you are willing to call it a sickness; and if you are willing to use the pronoun “we” instead of “them,” not to beat ourselves up but to take responsibility for improving our reality in the spirit of Jesus Christ, then let me ask you: what are you going to do to help humanity be well?

I invite you to sit with this query for a time. Kids too, because you are an important part of what will heal us. What are you going to do to help humanity be well?